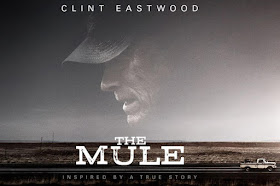 One of the best things about this movie is the new light you see Clint Eastwood in. You've become so used to see him be a cussed, grouchy senior, it's actually fun, especially in the opening few minutes, to see him laughing, chatting, joking, dancing with his peers. However, when faced with a downturn in the business, faced with the prospect of letting down his beloved grand-daughter (Taissa Farmiga, I'd liked her in At Middleton, along with big sis Vera, who's, of course, brilliant in Up In The Air) he turns into a drug mule. Someone who carries drugs for the cartel from one place to another. And becomes hugely successful. So successful that he gets to meet cartel head honcho Andy Garcia but also comes under the radar of DEA agents Bradley Cooper and Michael Pena, along with their boss Laurence Fishburne.

How all this, along with solving the problems of his family including a wife, Dianne Wiest (remember her spunky turn in The Birdcage?), who hates him and daughter, Alison Eastwood (his feisty real life daughter), who won't speak with him or attend a party if he's there, is the story of the second half.

I liked the way the film showed how easy it is to get sucked into becoming a drug mule. The works easy, the money's great and if you don't get caught (or until you do), it seems perfect. We see a number of young kids get entrapped this way, especially when they go for holidays to countries known for drug production. And while loving the slow, languorous pace and the fine performances of all concerned, I found the final act, the last third, so to speak, a bit too tame, too easy. Can't imagine that happening in real life (and this movie is inspired by a true story). That brought the overall rating down a bit, else it's good for a chuckle or two, or a relaxed evening watch.