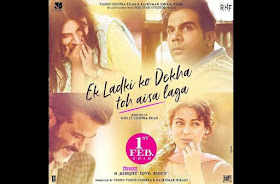 In the opening credits, all the women's names are introduced with a pink font.
Men are given a yellow colour, but then (wait for it), with a pink underline akin to the title
However, in a surprise twist, all the names burst into a glorious explosion of CGI generated yellow and pink petals

If the above appeals to you, please stop reading this review now and go watch the film - there's a high probability you might enjoy it. Others can carry on reading.

Sonam, who hails from Moga (Punjab), accidentally meets Rajkummar Rao, a drama writer (and son of a famous producer) while trying to escape from her brother. "Your drama, a modern love story, has a flaw", she sweetly tells him. "It contains no syaapa" - and how can there be true love without any angst (wasn't a similar line used in Rockstar?)? That's all it takes for Mr Rao to pack up bags and move to Moga, to develop his next play there, with Juhi Chawla (the drama's caterer and aspiring actress) in tow. Over there he encounters the weakly enacted brother, Abhishek Duhan, the father (Anil Kapoor), the Biji (Madhumalti Kapoor) and the long time domestic help (Brijendra Kala and Seema Pahwa). You see, Sonam Kapoor has a secret, which she confides only in her diary and it keeps her lonely (PS : the title contains a clue) (NB : If you still don't get it, there's a sledgehammer-esque hint in the trailer). If you haven't got it yet, after the above 2 clues, please go for the movie, you're definitely going to enjoy it !

Let me try and think of the good things I can say about the movie.

There are great performances by everyone except the lead actress and Abhishek.

I liked the diary that the younger Sonam maintained - though arguably it wasn't really something someone of her age would've / could've done (the writing and drawing).

Now for the bad (and the ugly)

It's cliched, predictable and has an irritating soundtrack that has all the subtlety of a bazooka 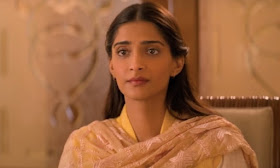 And the biggest mistake the director, producers made is casting Sonam Kapoor in the lead role. Right from the opening few scenes, opposite Rajkummar Rao, it's painfully obvious she can't hold a candle to his acting skills. Then her father (despite his pathetic, mysteriously appearing -disappearing accent), the effervescent Juhi Chawla (was it necessary to make her say 'mind-shattering' 21 times ?) Seema Pahwa and Brijendra Kala continue to show her up. And finally, even the talented Regina Cassandra, who barely has a few scenes, completely shades her, with her expressive eyes speaking a thousand words in every scene. 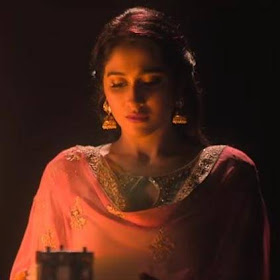 The end is the very definition of hackneyed, stereotypical balderdash (the fact that they used a plot device first used in Karz, which was made all the way back in 1980, reveals the paucity of original thought).

You can also make out the shallowness, pretentiousness of the film by one simple fact. Apart from her orientation, you don't know a single fact about Sonam's character. In her diary, which has been written over years, there is nothing else mentioned - no hobbies, happy days - apart from her loneliness and desires. We know she (perhaps) wants to do an MBA - but even that is just a plot device to give her an excuse to go to Delhi. There's no clue about what she wants to do in life, her ambitions, what she has studied, her other interests - nothing ! It's as if there is nothing else to her persona apart from her 'secret'!

Also, the makers attempts to talk about the 'secret' in the movie during the promotions were as laughable as anything in the movie - they probably realized the film had no hope for success unless they gave it all away. However, out of the 10 or so people in the hall, 5 had walked out shortly after the interval.

I think the real 'secret' is that Sonam can't act. 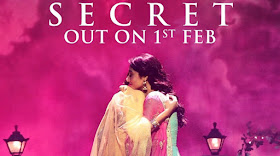