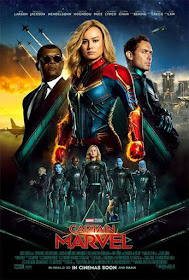 No, I didn't watch it in Hindi, but in a way, I wish I had, because in it's essence this is a classic Hindi movie. But done the classic Marvel way, with style, special effects and healthy doses of sarcasm and humour.

Brie Larson has some gaps in her memory, ever since she washed up on planet Hala with no clue about who she was. She's a Kree super warrior (the Kree Kshatriya), being mentored by Jude Law to overcome her inhibitions, realise her potential and to fix her memory. She has dreams, usually of Anette Benning, and of flying fighter jets, but no recollection of anything else. The Supreme AI of the Kree is also trying to help, but all to no avail. And then there is a mission to fight against the Skrull, the shape-shifting enemies of the Kree, which goes wrong. And she lands up on planet C-53, Earth, with a younger Samuel Jackson & Clark Gregg of SHIELD for company. Cameos by Lashana Lynch, Ben Mendelssohn (he was great, especially with his distinctive voice) and Lee Pace (Ronan) help bring the movie to a predictable but rollicking conclusion.

Have always been a fan of Brie (pun intended), especially in Kong : Skull Island and she plays the role to perfection, at her best with the one-liners and deadpan humour

But, there are gigantic loopholes (won't discuss for fear of giving away too much), you can see even the 'twists' coming a mile away and the conclusion is too neat, too pat, just simply too easy.

If it weren't for the curiousity value of knowing where this big piece / superhero fits in the gigantic Marvel universe, Thanos fighting, Avengers series, I guess the rating would have been even lower.

It's not bad, as a one time watch. Nothing more.